Any questions concerting our services?

The design of steel silo in order to obtain reliable flow is possible on the basis of measured material properties and calculation methods. Because badly designed silos can yield operational problems and a decrease of the product quality, the geometry of silos should be determined always on the basis of the material properties. The expenses for testing and silo design are small compared to the costs of loss of production, quality problems and retrofits.

Two different modes of flow can be observed if a bulk solid is discharged from a silo: mass flow and funnel flow. In case of mass flow, the whole contents of the silo are in motion at discharge. Mass flow is only possible, if the hopper walls are sufficiently steep and/or smooth, and the bulk solid is discharged across the whole outlet opening. If a hopper wall is too flat or too rough, funnel flow will appear. In case of funnel flow , only that bulk solid is in motion first, which is placed in the area more or less above the outlet. The bulk solid adjacent to the hopper walls remains at rest and is called „dead" or „stagnant" zone. This bulk solid can be discharged only when the silo is emptied completely. The dead zones can reach the surface of the bulk solid filling so that funnel flow becomes obviously when observing the surface. It is possible as well that the dead zones are located only in the lower part of the silo so that funnel flow cannot be recognized by observing the surface of the silo filling.

Arching: If a stable arch is formed above the outlet so that the flow of the bulk solid is stopped, then this situation is called arching . In case of fine grained, cohesive bulk solid, the reason of arching is the strength (unconfined yield strength) of the bulk solid which is caused by the adhesion forces acting between the particles. In case of coarse grained bulk solid, arching is caused by blocking of single particles. Arching can be prevented by sufficiently large outlets.

Ratholing occurs in case of funnel flow if only the bulk solid above the outlet is flowing out, and the remaining bulk solid - the dead zones keeps on its place and forms the rathole. The reason for this is the strength (unconfined yield strength) of the bulk solid. If the bulk solid consolidates increasingly with increasing period of storage at rest, the risk of ratholing increases. If a funnel flow silo is not emptied completely in sufficiently small regular time intervals, the period of storage at rest can become very large thus causing a strong time consolidation.

Irregular flow occurs if arches and ratholes are formed and collapse alternately. Thereby fine grained bulk solids can become fluidized when falling downwards to the outlet opening, so that they flow out of the silo like a fluid. This behaviors is called flooding. Flooding can cause a lot of dust, a continuous discharge becomes impossible.

Wide residence time distribution: If dead zones are formed (funnel flow), the bulk solid in this zones is discharged only at the complete emptying of the silo, whereas bulk solid, which is filled in later, but located closer to the axis of the silo, is discharged earlier. Because of that, a wide distribution of residence time appears which is disadvantageous in some cases.

Segregation: If a heap is formed on the bulk solids' surface at filling of the silo, segregation is possible according to particle size or particle density . In case of centric filling as shown in figure, the larger particles accumulate close to the silo walls, while the smaller particles collect in the center. In case of funnel flow, the finer particles, which are placed close to the center, are discharged first while the coarser particles are discharged at the end. If such a silo is used, for example, as a buffer for a packing machine, this behaviors will yield to different particle size distributions in each packing. In case of a mass flow, the bulk solid will segregate at filling in the same manner, but it will become "remixed" when flowing downwards in the hopper. Therewith, at mass flow the segregation effect described above is reduced significantly. 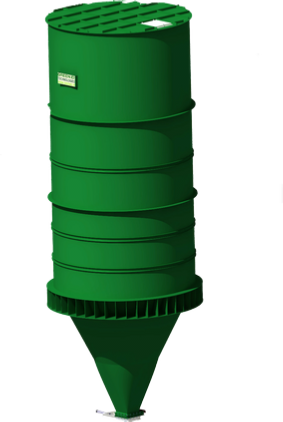 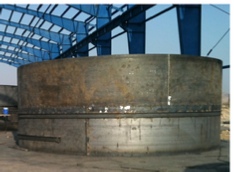